Having found my feet as an international DE student, I faced the question of what research was and if I wanted to be a researcher.

Research methods challenged my assumptions as a "hard science" computer professional that research is only about the application of the experimental method using quantitative tests. I learned there are non-quantitative forms of research. Also, I have the chance to discuss the future of learning at one of Canada's universities.

"This review looks at one study from the late 1990s into what the range of participation in CMCs was and why (Taylor, 1998). This could be useful in informing today's e-Learning and MOOC developers. The use of Computer Mediated Communication (CMC) for education is now the subject of discussion in the media. Many reports on the use of Massive Open Online Courses (MOOCs), make claims that students will engage with computers for education in a new way. However, there are decades of literature on computer based distance education which can inform the current debate. MOOCs have been proposed as a way to broaden access to education, but have barriers to previous forms of online participator been overcome?"

5.2.     Identify, discuss and apply theoretical considerations to proposed research
5.3.     Access and critically evaluate sources and content for quality, applicability and relevance
5.4.     Critically review literature both broadly and in-depth
5.5.     Formulate questions and reasoned arguments, leading to rational conclusions
5.6.     Summarize and synthesize information with a view to pursuing deeper understanding
5.7.     Effectively communicate information, arguments, and analyses in the discipline of Distance Education, in a
variety of forms, to suit different contexts and audiences
5.8.     Critically analyze the issues and discuss the wider implications affecting the use of information
5.10.     Demonstrate the use of communications and other technology-based research tools5.11.     Describe and adhere to ethical practices and institutional policies throughout the research process.

I found statistics challenging, but learned enough to read and critique a research paper:

"[Fellow student], this course has certainly improved my ability to review literature. I found the statistical analysis assignment very hard work. But afterwards I was reading a paper and realized I could understand the statistics in it. It was as I have read about people who are learning a second language and one day discover they understand it without conscious effort.

However, the course has been so difficult that it has made me reconsider my plan to undertake the research path for my Masters, or even if I am suited to doing a masters of education at all. However, I will hold off until the end of the course before making a decision."

In the paper, I critiqued a study of Computer Mediated Communication (CMC). The study was more than a decade old, but I was able to draw lessons from this for today's e-learning and MOOCs (Competency area 3,  particularly 3.2). A very topical issue in the paper was why some learners participate in on-line forums more than others (3.3). The paper considered different forms of CMC (3.4). However, a theme which I kept returning to was that it is more about the learner than the technology used:

"It might be argued that Lurking and Communication Apprehension are obsolete concepts in the age of social media and smart phones, with every one (or at least every young university student) comfortable being online, all the time. However, students of any age can still experience anxiety speaking in a formal academic setting, be it online or a physical classroom, so these are issues still worth exploring."

In 2014, after completing MDDE 602, I had the opportunity to visit Vancouver and spend a week at the University of British Columbia (UBC) campus for a computer conference. My room was on the 17th floor of the Walter Gage Student Residence, with a magnificent view of Vancouver Harbor. UBC happened to be having a  Flexible Learning Strategy Workshop, the day I arrived. So I got off the aircraft from Sydney and two hours later was in a meeting with the UBC Vice Provost, senior academics and learning design staff. I agreed not to reveal the details of what was discussed, but I noted in my journal that one participant commented being asked to envision flexible learning was "... like asking a bus driver about the future of transport: they may think of a flying bus, but it would still be a bus". Another commented that they felt like they were "... tied to the bow of a ship and were wondering where it was being steered and by whom". A  summary of the discussions: "Flexible Learning Charting a Strategic Vision for UBC: Vancouver Campus"  was released by the UBC Office of the Provost (September 2014). This provides a useful overview of the challenges for any large traditional university in providing flexible learning but does not come up with clear solutions. It made me realize that there were problems to be solved, big and small, which my MEd studies could explore.

The UBC meeting was held in a U-shaped Harvard style room, and I noticed that all the learning design staff (who would be called "professional staff" at an Australian university) sat on one side of the room and the academics on the other side. I found myself sitting in the middle, not sure who I identified with.

With my research article critique of CMC, I was also able to demonstrate the research competency area, particularly 5.4, 5.3 and 5.6. This became a problem in later, more practically orientated courses, as I tended to include too many references and too much theory, displacing the practical elements. As I already had practical experience in designing and delivery e-leaning, perhaps I was trying to compensate (overcompensate) for lack of academic qualifications in education.

As I had enrolled in the MEd program with the intention of taking the "Thesis route" and undertaking a research project, I was required to take Quantitative Research Methods (MDDE 701).  This started well:

"This week I attended a two hour  "SPSS Introduction"... This was one of those step by step introductions where you sit at a computer and do what the instructor is doing on the big screen. We did simple bar graphs, and tables of means, Standford deviations and the like.

This was very useful as we were using the Microsoft Winos version of SPSS and I could see that it looks just like the Linux version I will be using. When undertaking the previous MDDE statistical course I had the problem that the instructions were for Microsoft Excell and I was using OpenOffice. The instructions mostly worked, but there were frustrating differences.

There is an 'SPSS Advanced Significance Testing' session I have also signed up for."

"Assignment 1: First question done. This is a grindingly tedious way to learn something. But that seems to be the nature of statistics and something I doubt I will ever like. But hopefully I can pass the course, or I will have to give up on doing a thesis."

But after working hard on the set coursework and attending two additional face-to-face SPSS training sessions in Canberra, I could not make sufficient progress. I dropped the course and did not attempt it again. This was the hardest decision of the entire MEd program:

I have all but decided to drop MDDE701. The deadline for dropping it without penalty is 8 October. This would be preferable to risk failing both MDDE623 and 701. ... It was a mistake to try to do statistics and another course at the same time. ...

My decision to drop MDDE701 might have also been influenced by the teacher I had for the SPSS training sessions in Canberra. They explained that statistics was their passion and went on, at length, about the wonders of statistics, like a character from the US Sitcom "Big Bang Theory." I decided I was not that person. ;-)

Without MDDE701 I could not undertake the thesis route in the program. At this point, I considered abandoning the MEd program but instead decided to complete it through the coursework path. On reflection, I realized I was interested in the practice of teaching, informed by research. The M.Ed. program is based on theory informed practice. The decision will limit what I can teach and study in future. In particular, Australia's research orientated-universities have a negative opinion of "coursework" masters graduates. However, for an IT professional who teaches, this should be adequate.

By being able to critically review research papers, I am better able to choose from the many learning techniques and technologies available for use in my work. Rather than accepting every new e-learning fad which comes along, packaged into "Web 2.0" and "cloud" products, I can assess the theory underlying the offerings and the evidence supporting their effectiveness. This has already proved of value in the workplace. As an example, in the last few weeks, I have been consulted as to if Mahara SmartEvidence, or Moodle Competencies should be used for assessing skills. This was not  a product comparison, but an exercise in reconciling the different views of the nature and purposes of scholarship of the stakeholders

5.4.     Critically review literature both broadly and in-depth
5.5.     Formulate questions and reasoned arguments, leading to rational conclusions
5.6.     Summarize and synthesize information with a view to pursuing deeper understanding
5.7.     Effectively communicate information, arguments, and analyses in the discipline of Distance Education, in a variety of forms, to suit different contexts and audiences
5.8.     Critically analyze the issues and discuss the wider implications affecting the use of information
5.10.     Demonstrate the use of communications and other technology-based research tools
5.11.     Describe and adhere to ethical practices and institutional policies throughout the research process. 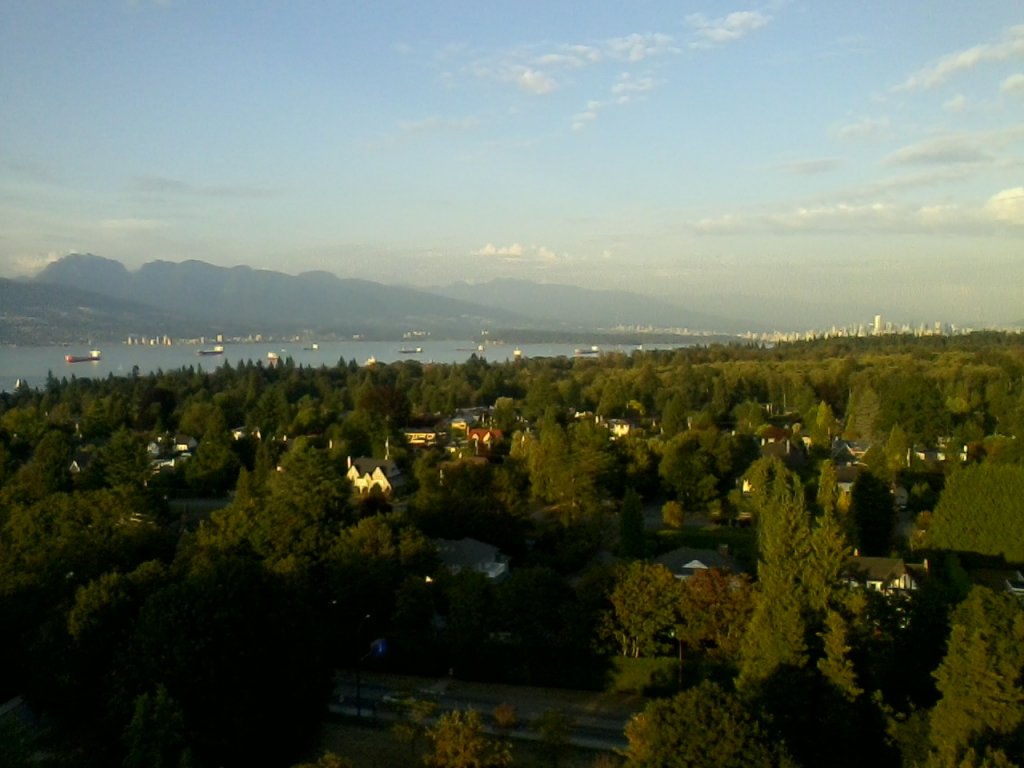 View of Vancouver Harbor, from the 17th floor of the Walter Gage Student Residence, UBC (Photo by Tom Worthington, CC-By 2.0 2014).

The journey and reflections from your journaling are telling of the angst and redirections I considered at the beginning of this program.  Very well done.

p.s.  I too had a great interest in MOOCs and used this as my focus for a number of assignments.

It would be helpful if you could say more with regard to the following sentence: "This became a problem in later, more practically orientated courses, as I tended to include too many references and too much theory, displacing the practical elements. As I already had practical experience in designing and delivery e-leaning, perhaps I was trying to compensate (overcompensate) for lack of academic qualifications in education."  The intent of the course-based M.Ed. program is to support praxis, i.e., theory informed practice. It would be helpful if you could connect your ability to critically review research literature to how you have applied it to your DE practice in your workplace.

Susan, thank you for your comments.

In response I added a paragraph to segue from the UBC meeting to the practitioner v research issue.  At the meeting I had to decide which side I was on, literally:  researchers sat on one side of the room and practitioners on the other.

To address theory informed practice in the workplace, I added the example of where I was consulted on which software should we use in Canberra for assessing skills: Mahara SmartEvidence, or Moodle Competencies. This was not so much a product comparison, as of different views of scholarship.

The addition of the contextual information helped me understand why you included the meeting with your reflection.  The addition of excerpts from your learning journal are great for showing insights into your thinking processes.

Just a small point -- you do not need to write out the full competency when you refer to it in your Reflection. Just the number in parentheses will suffice.